Our class recently did a seemingly magical experiment to teach the concept of volume.

Ms. Taryn presented the students with four containers of water, each container a different size and shape. One container was short and fat, one was tall and thin, one was a pint glass, and one was pinched in the middle, vase-like. The students looked at the containers full of water and predicted which container held the most water, and then the next most…

Container one had exactly one cup of water in it.

Container two had exactly one cup of water in it.

Container three had exactly one cup of water in it.

Container four had exactly one cup of water in it.

Wait. What? How could that be?

We talked about how even though the containers were different sizes and shapes, they all held the same volume! The students were shocked and amazed, much like a magic show. They learned by seeing for themselves the importance of measuring, how things may not always be as they seem, and the concept of volume.

Each day at Square Roots Preschool, we work on a group project that requires the students to work together. Sometimes we focus on phonics, sometimes science, or gardening, or cooking. We recently learned about our five senses through hands-on exploration and observation, which is much more effective for preschool-aged children than simply discussing the concept.

We used a familiar object that would intrigue the students so that they could look at it in a new, detailed way: the marshmallow! By passing around one marshmallow and allowing each child to have a turn to make observations, the students were able to listen to one another and absorb all of the information. We saved the sense of “taste” for last so that each of the students could have their own, fresh specimen. The children made some insightful (and sometimes funny) observations:

SIGHT: “I see bumps,” “looks like a lofty snowball,” “lots of white dots”

HEARING: “I hear touching,” “a gerbil scurrying around,” “nothing”

By observing, experimenting, and discussing the marshmallows, our preschoolers learned all about their five senses by doing. We asked our parents to reinforce these concepts at home by finding objects to explore and describe.

At Square Roots Preschool, we feel that science is an important part of our curriculum. Preschool-aged children have a natural curiosity about the world around them, and what better way to support that curiosity than by doing hands-on experiments that ask the children to make predictions, observations, and draw conclusions.

When we studied the letter “Ee,” we conducted our naked egg science experiment. The first part of our experiment required us to place an egg carefully in a glass and pour vinegar over the top. Some students predicted that the egg would float, and others predicted that the egg would sink. The students each got a chance to pour (with a little bit of help). They observed that the egg floated! The next part of our experiment required patience. We had to wait a few days to see what effect the vinegar would have on the egg.

After a few days, the shell of the egg became soft, and the yolk of the egg became rubbery, like a ball. Since young students learn best by doing, the students got to feel the egg and yolk and describe it. It was ooey-gooey scientific fun!

Later in the week, we conducted an Egg Drop experiment, which taught us about cause and effect and prediction. Each student chose a material to protect his or her egg, and then everyone predicted what would happen to each egg. With no protection, the students predicted that

The yolk will go all over the ground!

I think it will break.

We then protected the egg with a paper napkin, bubble wrap, absorbent pad, plastic baggie, and a towel, in turn. Each student had the opportunity to drop their own egg and make observations about the results. We concluded that bubble wrap was the most protective material because the egg didn’t break at all! 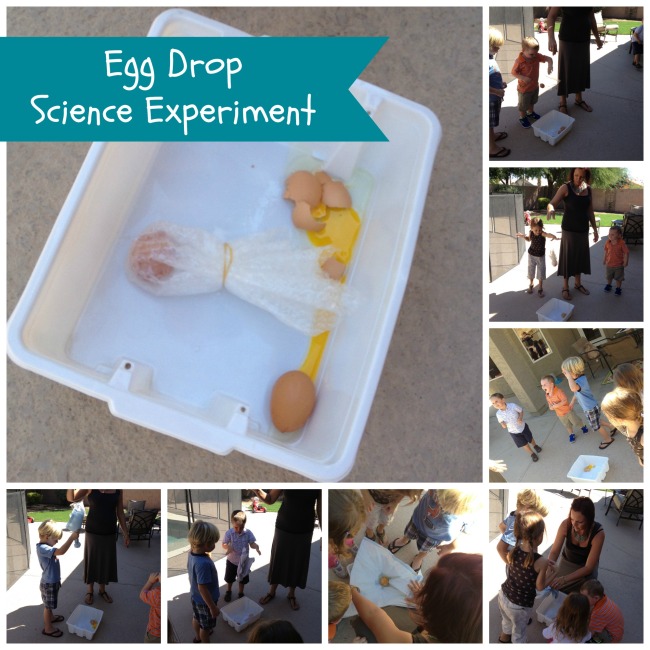 Too often, science is considered something “extra” for young students. Science lessons help develop so many skills, so we feel it is important to make the subject an integral part of our school day. For more information about the importance of science (and math) for young learners, check out Math and Science in Preschool: Policies and Practice.